… go to www.scapetrust.org for our current blog

Scattered along the Culbin edge of Findhorn Bay lie the remains of at least 35 large wooden fishing boats. These are extremely rare survivals of the once common mighty Zulu herring drifter. Today only a single Class 1 Zulu survives in the Scottish Fisheries Museum in Anstruther.

Findhorn-based SCHARP volunteer Michael brought the wrecks to our attention following the ShoreDIG survey of the Embo Zulus in Loch Fleet last year. Michael had already made a record of dozens of ballast mounds and distinctive ships timbers and steam boilers. We wondered if the sheltered bay at Findhorn, so reminiscent of the safe haven at Loch Fleet, had served as a winter mooring for some of the many hundreds of fishing boats which once sailed out of Moray ports.

An old postcard, unearthed by Tim Negus of Findhorn Heritage, shows ranks of Zulus lined up in the same area as the wrecks and mounds of ballast are found today. 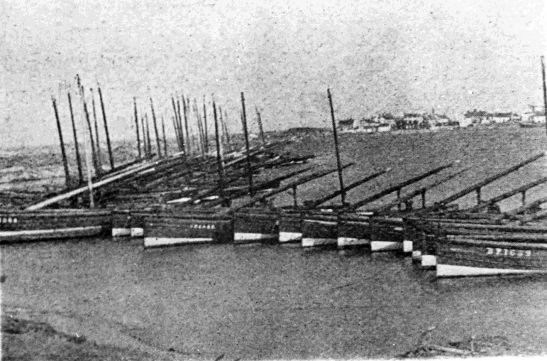 Zulus lined up on the  beach on the Culbin side of Findhorn Bay. You can see Findhorn in the background

At the height of the herring boom in the late 19th century, these majestic boats would have been a great sight from the village. In the first decade of the 20th century, the herring fisheries declined very quickly. World War 1 was the final death knell for the sailing drifters. Many boats were abandoned where they lay. Incredibly they are not recorded – they have slipped through the cracks of history. We all agreed there was a story to uncover here. A local project could save the memory of the fishing fleet just in time, and make a record of the physical evidence of the boats before it is too late.

Joining forces with the Nautical Archaeology Society, the first stages of the project involved making a survey of the remains and talking to as many local people as possible to learn more about them.

The survey revealed that the long wooden keels of several boats survive amongst the ballast. These were all over the 30 feet length of a Class 1 vessel. In fact the surviving keels on the Findhorn boats were generally much larger – some measuring 60 feet (18m).

The distinctively-raked stern timbers which are so characteristic of the Zulu were still visible in some cases. An almost complete stern post measuring 21 feet (6.5m) in length gives you some idea of the sheer scale of these boats. Other surviving structural elements included dead wood risers, iron shoes, dead eyes, futtocks, gudgeons, knees and floors! Thank goodness we had Steve from the NAS on hand to identify and explain the bewildering array of timbers and their arcane names. 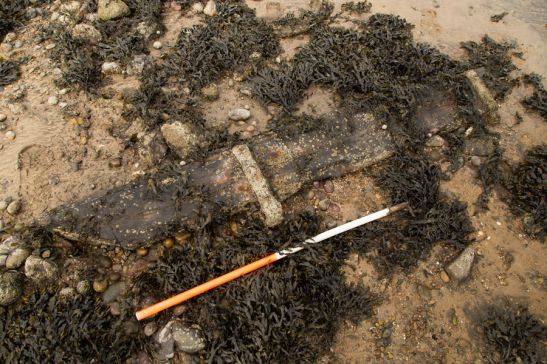 The survey also revealed surprises. One of the larger 50 foot keel boats was clearly of a clinker construction; a method of boat building where the edges of the hull planking overlap.

Only the very earliest Zulus were clinker-built. The later ones used the stronger carvel construction. So, we have an example of what could be an incredibly rare or even unique Class 1 clinker-built vessel at Findhorn.

The clinker-built Zulu. She would have been at least 70 feet long.

A full house in the James Milne Institute in Findhorn on Saturday learnt about Scottish fishing boats, the local Findhorn fisheries and the archaeological survey at Loch Fleet from four speakers.

There were plenty of contributions from the floor about remains of other wrecks in the Bay and memories of diving off some of the upstanding timbers as children! We learnt that the pier at Culbin was constructed from timbers and ballast from the nearby Zulus, and that re-used timbers from the wrecks had made their way into a number of village structures. 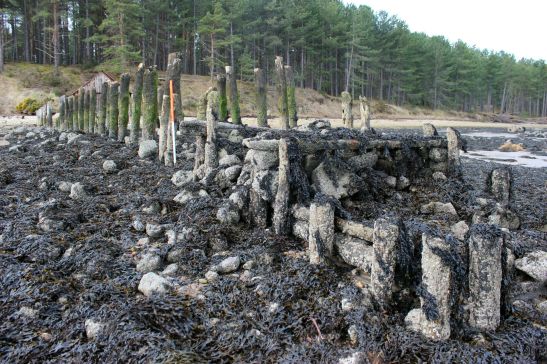 We had such an interesting and enjoyable trip to Findhorn. Thank you to everyone who joined us and shared your knowledge with us. The next stage of the project is to carry out detailed recording and measured drawings of each surviving wreck. We look forward to working with volunteers from the Findhorn community to do this in the summer.